Once upon a time there was a young flipchart called Philip. And Philip’s dream was to fly. All his cousins laughed at him for his dream, after all, how was he supposed to fly? “You can stand and roll – but fly? Flying is just for dreamers! Look in the mirror, Philip!”

But Philip held onto his dream and, instead of catching dust, hit the road, meeting the inventors of “CompactChart”, who were headed in the same direction. It’s less lonely together!

The CompactChart team thought so too and were delighted to have gained new supporters through the EXIST founders’ grant such as the BMWi and the ESF.

Of course,that did not come about by flicking one’s fingers. Months of work went into our applications and then the waiting began. Hours passed – days passed. But one day, a Monday, the team was sitting in their weekly briefing when the telephone rang. A potential supplier introduced himself and asked for technical details.A brief exchange of data followed. That’s a small step for production, one giant leap for Philip.

The team resumed their meeting and, who could have guessed, it was one of those Mondays when the phone just wouldn’t ringing. The call was answered by a slightly unnerved team member, who was greeted by a female voice. “Good day, Mr Reich? I have good news and bad news for you!” The tension in the room was unbearable –they had been waiting all week for the EXIST project sponsor’s decision. “Weare glad to inform you that the decision was made in your favour…” As suddenly as the call had arrived, it ended. Everyone had envisioned this moment differently. Where was the champagne?

Half a year ago, we were exactly where we are today – more or less. The goal was to make our portable flipchart ready for the market with the support of the EXIST grant. From now on, we pursue this goal in the premises provided by the TU Bergakademie Freiberg: an office and a workshop. Thank you for those!

Now we had a place to modify and electrify our roller, test all kinds of film glues and set our system into motion.

We tweaked our construction over and over again, asked customers and then fine-tuned it some more. In accord with the motto of the Lean Startup Method “Build – Measure– Learn” not only did we learn more about our customers, we also nurtured a deeper understanding of our product. What were we actually developing? As a product: a mobile flipchart, as a vision: independence for presenters.

The motivation drove us on and on and so a functional design became a design pattern and a design pattern the draft of the first prototype. Today you can marvel at its new livery on our homepage– we are proud of it!

Our company also took on a new semblance. In August we founded the Compact Solutions GmbH. And suddenly one is the proud owner of a real company, that’s pretty cool! But running a business also brings a lot of work with it. Overnight, a tinkerer became a manager and a project outline became our first monthly payoff.

Behind the scenes things didn’t slow down, quite on the contrary. We professionalised our backend with a proper Customer Relationship Management System (CRM). Projectmanagement with many different applications from Asana to Agantty is fun,there’s no question about that, but it was due time to turn the project’s internal structures into those a proper company. Our new CRM is ProjektronBCS.start, it has already been installed and implemented.

We also worked on and steadily improved our internet presence. Hence, we wrote articles, gave the homepage a facelift, and created Xing and LinkedIn profiles.But feeding those with all these exciting details about our product, our history, and us only makes sense, if someone actually reads them! So, we did some SEO (Search Engine Optimisation).

How can one find us? By searching for ‘mobile flipchart’, ‘premium flipchart’, or rather‘whiteboard’?

Of course,it didn’t all go as we had imagined it, contrariwise everyone would found a company. As some of you may know, the launch was originally scheduled for October this year. In hindsight, that calculation was a little too optimistic.Additionally, we only want to offer you the best. Good things come to those who wait.

Also, who would have thought it would take months of work to find investors to fund us after the EXIST grant expires? Anyone curious about the exact number of pitches and conversations we already had with investors, for example at the Roadshow of FutureSax in the Deutsche Bank’s Quarters of the Future, can talk to us at our booth on the upcoming fairs (iENA/Nuremberg; Interpädagogica/Graz) or at one oft he countless other events we attend! There currently no end in sight to the presenting; believe it or not, once we had all the banners and posters at our disposal, going to exhibitions and presenting our product in front of a live audience turned out to be a lot of fun!

In addition to presentations and introductions at associations and foundations, we socialized like crazy with suppliers and distributors, even on one of our very first fairs, the Insights-X in Nürnberg, and received promising feedback from all around the globe. That was certainly not only thanks to our sweets featuring our logo – but they may have helped. Creativity must be rewarded!

Until the time has come to hold our the finished CompactChart in your hands, we bid your patience and understanding. You support us by staying up-to-date, registering as potential buyers  – or by relaying the message to your family and friends: “The mobile flipchart exists!” 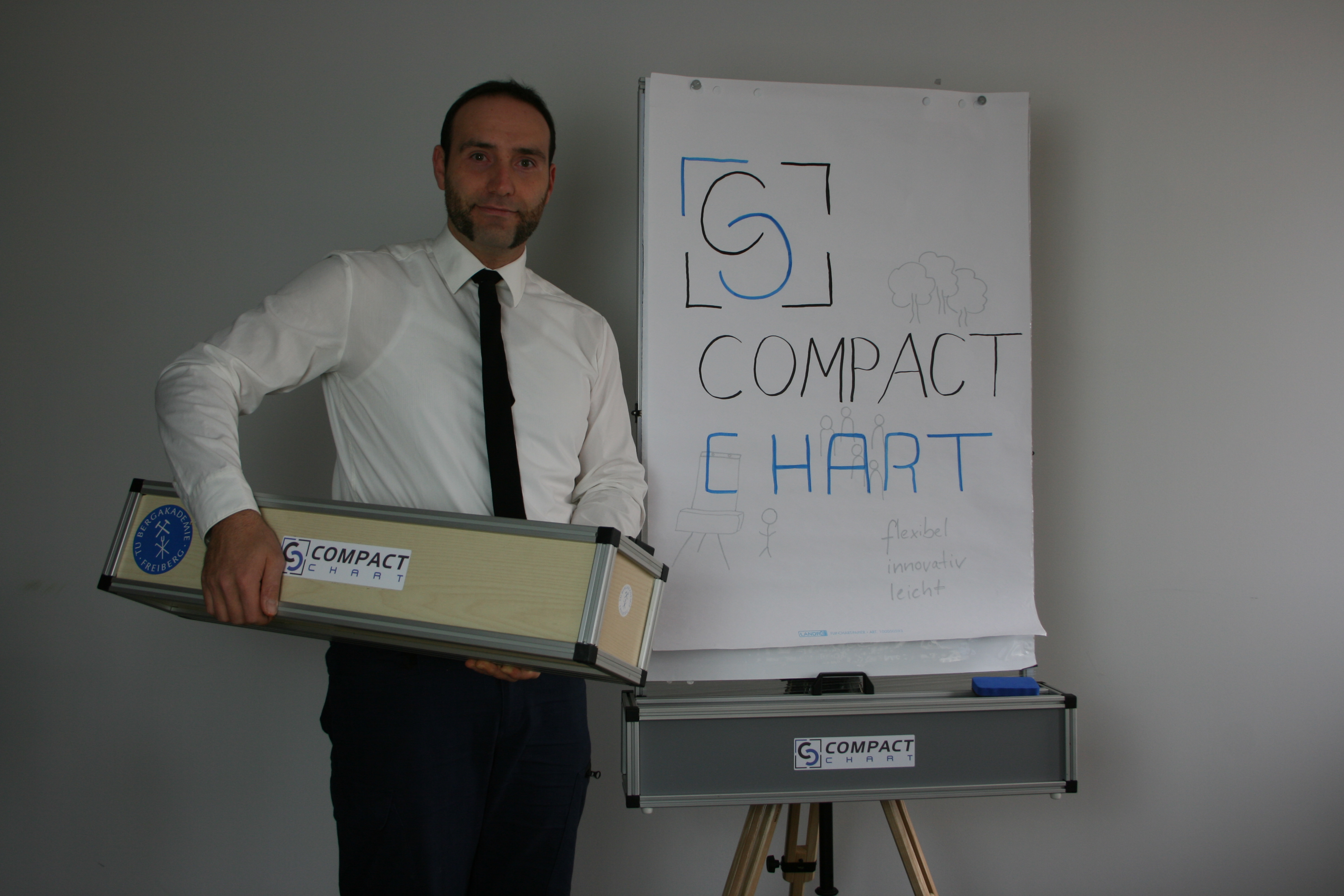 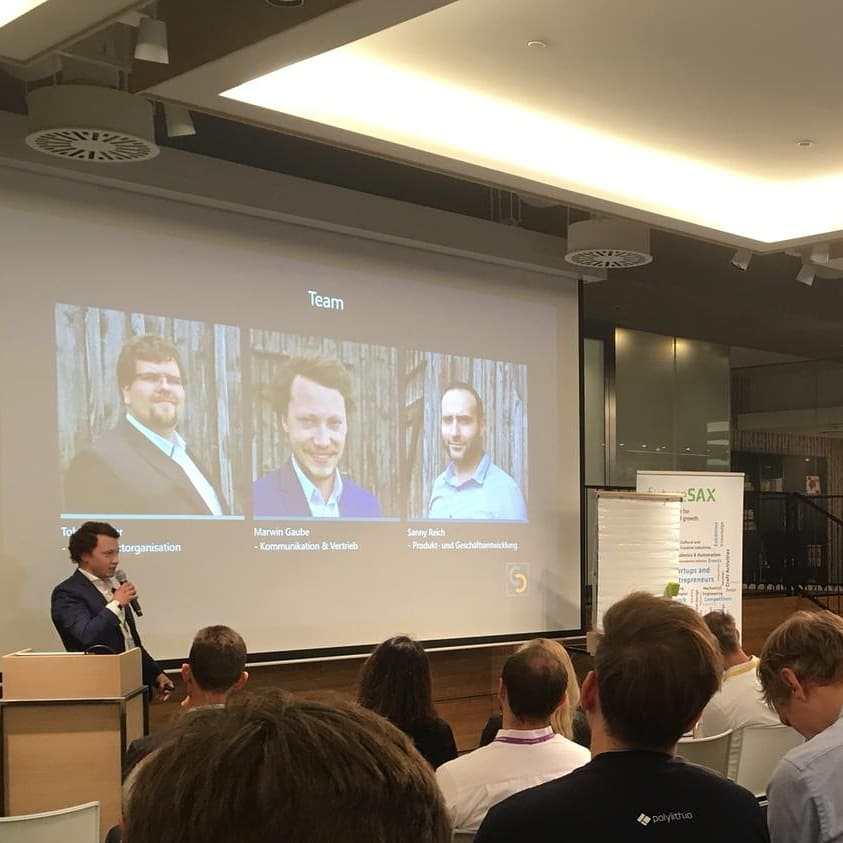